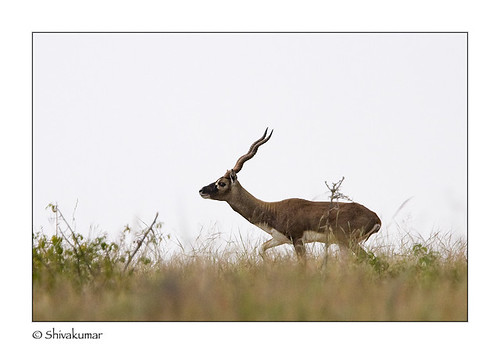 Blackbuck (Antilope cervicapra) is a species of antelope found mainly in India, but also in parts of Pakistan and Nepal. 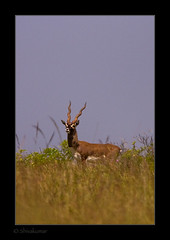 The horns of the Blackbuck are ringed with 3 to 4 turns and can be as long as 28 inches. The Adult males can grow as tall as 32 inches and can weigh as much as 95 pounds. In the male, the upper body is black (dark brown), and the belly and eye rings are white. The light-brown female is usually hornless. Blackbucks usually roam the plains in herds of 15 to 20 animals with one dominant male. Its original habitat is open plain and not dense jungles. The diet of the Blackbuck consists mostly of grasses, although it does eat pods, flowers and fruits to supplement its diet. The maximum life span recorded is 16 years and the average is 12 years. 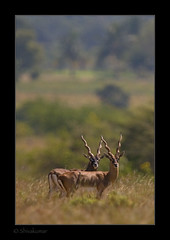 On the open plain, the Blackbuck is one of the fastest animals and can outrun most predators over long distances.

The Blackbuck is hunted for sport, its flesh and its skin. Although Indian law strictly prohibits the hunting of these endangered animals, there are still occasional incidents of poaching. The remaining populations are under threat from inbreeding. The natural habitat of the Blackbuck is being encroached upon by man’s need for arable land and grazing ground for domesticated cattle. Exposure to domesticated cattle also renders the Blackbuck exposed to bovine diseases. 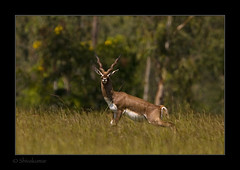 Like most wild animals, the Blackbuck is in principle protected in India by the Wildlife Protection Act of 1972. Its protected status has gained publicity through a widely reported court case in which one of India’s leading film stars, Salman Khan, was sentenced to five years imprisonment for killing two black bucks and several endangered chinkaras. The arrest was prompted by intense protests from the Bishnoi ethnic group, which holds animals and trees sacred, and on whose land the hunting had taken place. 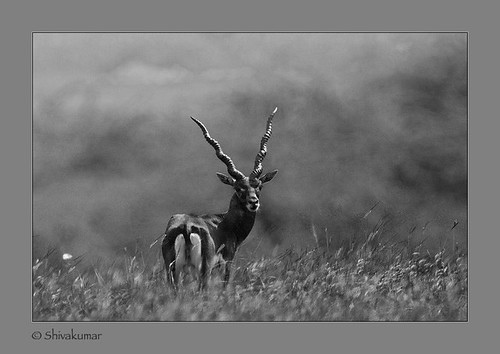 “Jayamangali Blackbuck Reserve borders Maidenahalli a small village situated in the plains of Deccan plateau at the north-eastern tip of Tumkur district of Karnataka state, bordering Anantpur district of Andhra Pradesh. The largest population of Blackbuck in Karnataka, apart from Ranibennur sanctuary, is found at Jayamangali Blackbuck reserve. It is an 839 acre patch of grassland planted with Eucalyptus and Acacia auriculiformis. It is probably the best place in Karnataka to photograph blackbuck apart from grassland flora and fauna.”

1. Drive on the National Highway 4 towards Tumkur town.
2. 3.5 kilometres after the Kyathasandra Highway toll gate and about 3 kilometres before Tumkur City, the Highway splits into Shimoga Road (which enters Tumkur City) and Sira Road (which bypasses Tumkur City).
3. Travel on the Tumkur Bypass / Sira Road for about 4 km and you should reach an under-construction overpass. Turn Right towards Madhugiri Town.
4. Travel on the Madhugiri Road for 41 kilometres till you reach Madhugiri Town.
5. From Madhugiri Town take the road to Hindupur Town About 1.5 km from Madhugiri Town the roadsplits into Hindupur Road on the left and Chikballapur/Gowridbidanur Road that goes straight. It’s easy to be confused here. You have to make a left turn towards Hindupur.
6. Keep following/asking for direction towards Kodigehalli.
7. Once you reach Kodigehalli bus stand – just drive down straight on your left hand side. POINTER: After the bus stand there is a Flagpole in the centre of the road, you need to take the road going on its left  when you are facing it. You should now be travelling/asking for Hosahalli
8. When you are driving on this small lane you will come across small shops on both the side. Watchout for the house with the name “Sri Devi Krupa” on the left hand side next to a shop (Its a pretty big house but the name is written in Kannada). Take the road which is opposite to the house.
9. You will reach a point where you have to take a right or left turn ( Pointer: a Petty shop right at the end of the road opposite to the way you are travelling ), take a left turn on this road.
10. This road curves to the left at which point you can see a Grama Panchaythi Office on the right corner.
11. As you drive down further on this small lane – you will see a school at the end  of the road (Mydanahalli Primary School / Mydanahalli Kiriya Prathamika Shale), at this point take a left and the immediate right ( road adjacent to School or the road attached to the right of the school ).
12. Keep an eye on the left hand side where you will come across a water tank ( POINTER: Blue water tank ), take a right turn at this point.
13. Drive down straight for about 3kms ( at one point you will see a junction – but continue driving straight ) – where you will reach the gate of the forest. POINTER: As you reach closer to the gate you will notice that the land changes into a open grass land on both the sides.
14. Once you enter the gate – start looking out for herds of Blackbucks ( NOTE: The road inside is getting a face lift and also new plantations are coming in on both the sides ).

IMPORTANT POINTS:
1. Keep asking for the villagers about the place by means of key words like “Mydanahalli”, “Kodigehalli”, “Hosahalli”, “Krishna Mruga”(meaning Blackbuck).
2. Avoid taking low chassi cars.
3. No food or hotels are found around this place and the nearest one you can find is in Madhugiri, so carry eatables or fruits along ( Please avoid carrying food stuffs in Plastic carry bags and discarding the same there after use).
4. Its advisable to carry enough drinking water to last until you reach back Madhugiri at the end of the day.
5. As its a grass land and it can get really hot during peak days – its preferable to wear cotton clothes and carry cap if you plan to get down the car and walk along the track.
6. Try to leave Bangalore a bit early as the possibility of getting lost is more and you might end up in the place in mid day – during which the Blackbucks might prefer resting far away from the track in the fields.

Jaisalmer, The Golden City: Things To Do

Wishing you a very prosperous 2010