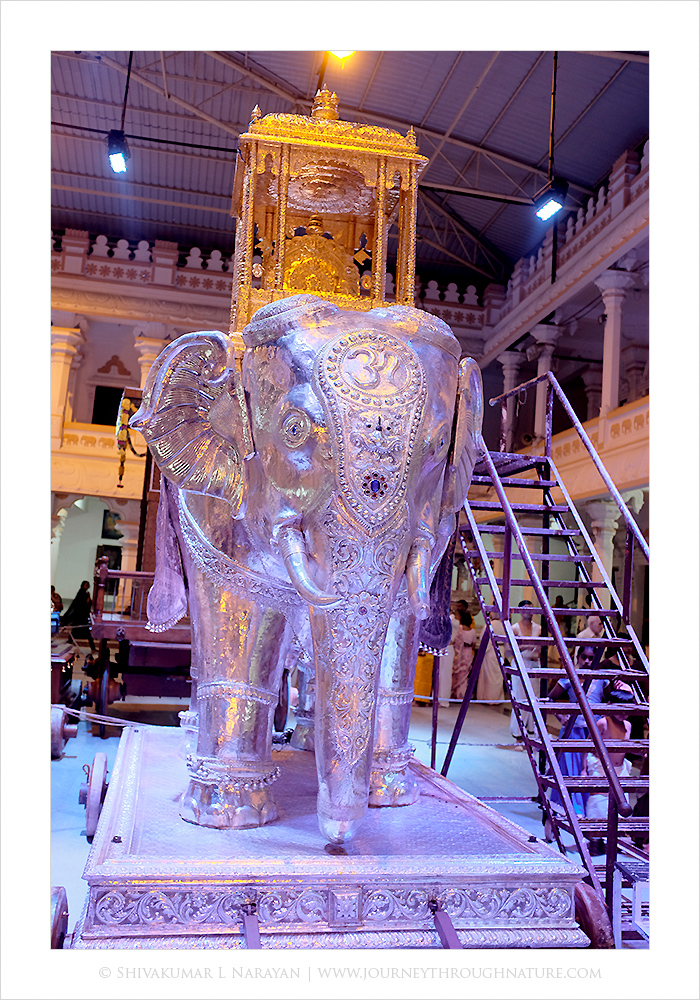 PS : Let me be very frank and honest that i am not for / against any culture or tradition or system that has been followed since ages, the words that I write here are my personal thoughts on what could be use in place of existing to make world a better place to live.

Over the diwali long weekend I happened to drive down to a temple along with my family as a customary annual visit. This time around in the evening i came across something new and surprising. Everyday evening at this temple there is a tradition called Rathothsava ( charriot festival ) that happens and 4-5 different varieties of charriots viz Wood, Silver, Gold, Navarathna are brought out into the premises and a small idol of the main deity is kept in these chariots and taken around the temple. A new inclusion this time around was this massive elephant chariot which they have done from silver and gold and which is aptly called Gajavahana. The chariot mainly comprises of a fairly big platform which is fitted with wheels on which stands  a good 12 feet + tall elephant statue with intricate carvings and on top of this is a golden howda/ambari which will hold the idol of the god. This was one of the first one to go out for the procession and once done this gets locked in a secure room adjacent to the sanctum. When out for the procession the chariot almost resembles a full size elephant walking in the premises with the idol on its back. In previous visits i do have seen a real life elephant being owned by the temple authorities but i didn’t happen to notice it during my 2 day stay this year.

The reason why I am writing the above is with regard to what happens at Mysore every year during the dusshera. Every year elephants are brought in from Dubare or surrounding elephant camps which are then trained and taken care of during the days preceeding to the festival where in the elephants are fed with high protein diet, taken out in busy traffic to make them acquainted to noisy outdoor situation and also loaded with sand bags which weigh the same as what the main golden howda would weigh ( ~750kg) to ensure they get used to the weight on the actual day. For a tourist or visitor or even for localite this is a tradition which has been followed since ages and which cant be changed. But what i felt is why make these elephants go through all these traumatic situation which is away from its normal day to day life. I really wonder if elephants have memories which will make them track a calendar year and get themself ready for the dusshera season every year in october. Lifting heavy weight, going through traffic, walking past lakhs of people on the d day is not something which an elephant is suppose to go through. Instead why not replace the real life elephants with life size statues made up of best of the precious elements that one can think or afford of. Talking of affording, sure its not an excuse to say that Mysore palace or Chamundi hills authorities don’t have enough money to afford a silver/gold real life size replica of a elephant. Having something like this also means it is more consistent, repeatable, and most of all reduces the effort on the mahouts and also the stress on the elephants which have been doing this task for years now. When someone can think of coming up with a larger than life statue of freedom fighters, then whey not something like this which gets used and appreciated every year or may be through out the year ?

Time and again i have come across NGO and other organisation who come out of hibernation during dusshera and raise voice and write numerous articles and petitions asking not to trouble/harm/stress the Psychaderm – but all calls go in vain for next 11 months. Because at the end of the day what is conservation and care for wildlife for few is a tradition and culture for others.

Its just a random thought which came into my mind which i thought will share it with my fellow readers. What do you think about this ? doable ? Can status replace the real life counterparts at all ?

How to be come "SUCK"cessful Photographer ?