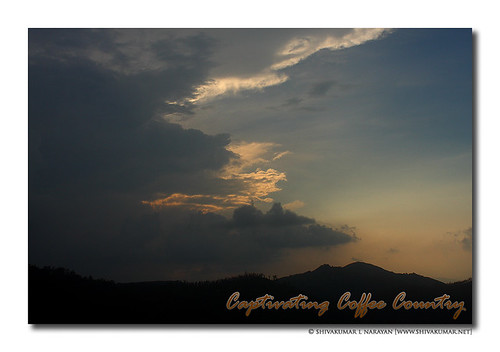 Chikmagalur district (Which was called kadur district till 1947) is one of the 29 districts of Karnataka. It is satiated roughly in the south western part of Karnataka state. A large area of this district is stupendous barrier of the baba budan mountain range is in the center of the district. The Western Ghats range, which borders the western part of the district, rises into some of the loftiest peaks. The landscape of the tract is highly enchanting. The slope of the mountain and hills here are replete with fascinating natural beauty. They are clad with thick forest, through which the shining streams wind their way, fertilizing the narrow valleys and glades.

Myself and my fellow photography friend Pramod decided to use the 4 day Oct 1st week long weekend to be spent in Chikmagalur and Kemangundi. Our main agenda for the trip was Landscapes of this region but we were ready with all the tools for Macros and Avian photography as well (though my landscape backbone Canon 17-40F4 had gone to its in-laws for a small break – I resorted to use my aged but trustworthy Canon 28-80 lens as my main lens).

We started on 2nd morning at 430am through the Bangalore > Hassan > Belur > Chikmagalur route and the drive was pretty fast than what we expected. We headed to meet Mr. Lingaraju SS ( DCF, Chikmagalur ) who was our host for our trip and after a brief chat we were guided to the guesthouse where we had a short rest and were back in car by 12 for our first outing for the trip. The plan for the day was to go to Mulliangiri hill ( highest peak of our region ) and then follow it up with Dattapeeta. It was a festive day and clubbing that with a public holiday meant that we were facing a lot of crowd at the hill. We decided to explore the silent and less inhabited portion of the hill and spent some time shooting the landscapes. The sight of the hills with fresh green velvet wrapped around it with mist playing hide and seek was a sight to behold. We had called it a day at Mulliangiri and started our car when we spotted a Common Kestrel next to the car. After clicking a few frames Pramod pointed out at a distant hill and when we turned we were in for a pleasant surprise – a Black Eagle hovering across the valley in all splendors.

We had heard about the Black Eagle sightings from Mr. Lingaraju on the way to Mulliangiri but the sight of the majestic and massive raptor was best one could expect. The drive to Datta peeta was very bumpy and took some time for us to reach but was just at the time when sun was about to say good bye for the day. After having a crispy and delicious Masala dosa at a drive in hotel we called it a day and slept dreaming of the flight of the raptor.

The plan for day 2 was Kemamngundi and as per the plan we started off at 6am via the Lingadahalli route which was better option in terms of the road quality compared to the other options. On the way we stopped at a place and were waiting for a prinia to pop back on to the perch which we had seen it perched on. There was a repeated loud shrill call that we were hearing but the prinia made us ignore it. But at once when Pramod lifted his head to find out where the sound was from – we realized that we were greeted by another beautiful raptor – Changeable Hawk Eagle. The CHE was mobbed by couple of crows and was trying to test the raptor’s patience. Just when it had enough – the CHE decided to chase the crow until they gave away. On the way we also sighted more than 100 Pompadour Green Pigeons along with a lonely Oriental Honey Buzzard.

We booked our stay at the Horticulture dept dorm and headed to Hebbe falls in a rented jeep. I kept on wondering as to why it really requires a jeep and why shouldn’t I take my car to the spot and only half way through I realized if I had stuck to my decision to take my car – we would have ended up bringing the car parts in our backpack. If one has to try to see how it feels like imagining the anatomy of the human body getting drastically changed – then they have to try out these rides up and down the hill which comes at a cost too ( Rs. 750/- for a two way ride ). At hebbe my quota for leech bites started with a huge one clinging on to my right ankle, as moments passed my legs were infested with more leeches than the number of frames that I had clicked. Upon return we spent some time at Shanthi falls and Z point which are about 3 kms from Kemangundi horticulture centre. We were kept waiting for a dinner which was delayed due to the weekend crowd, but once it got over than the fastest shutter speed you can imagine with.

As we were ahead of the schedule by a day we opted to head back to Chikmagalur on Saturday and planned to leave to Basur (near Kadur) where Mr. Lingaraju had earlier spotted an Indian Wolf. Though we didn’t get to see the wolf we got to see quite a few Blackbucks along with lot of birds like Sandgrouses, Yellow wattled lapwings, Roller and another lifer in the form of Montagu’s Harrier (M). We opted to spend some time near a waterhole but disaster struck when we least expected – the front left of the car got stuck in a soft mud puddle and refused to come out and as attempts went by – the tire got buried deeper and deeper inside. A timely help by a local farmer with his tractor in pulling our car out of the pit gave us a sigh of relief. The sun had already set by the time we reached Kadur but we stuck to our idea of heading back to Bangalore and chose the Kadur > Arsikere > Tumkur > Bangalore route this time.

In all it was a very good and productive trip in terms of sightings ( CHE, Montagu’s, Blackeagle were lifers for me ) and good learning experience in photography with respect to planning according to geography of the place.

Through the course of the above write-up you must have come across the beauty of the place Chikmagalur and Kemangundi in the form of the images portrayed but what lies beneath is a very sad to witness. Chikmagalur and Kemangundi being a very popular tourist hotspot is not spared from the mementos that the people come here leave behind. Most of the spots that I visited found littered with plastic bottles, carry bags, chips wraps and most predominantly the liquor bottles. The people visiting the place don’t have the basic courtesy to keep the place and the region clean. We Nature photographers generally get to portray only the beauty aspect of the places that we visit but this time around I thought of showcasing few frames that I managed to capture showing the ugly aspect of human behavior. Everyone should be educated enough to realize that we have a lot of beauty which when maintained can be cherished for long. I also request officials to come up with waste disposal bins and hoardings educating people about such aspects in common tourist spots.

A special thanks to Mr. Lingaraju S S for all the assistance during the trip.

PS: Click on the above images for larger version of the images.