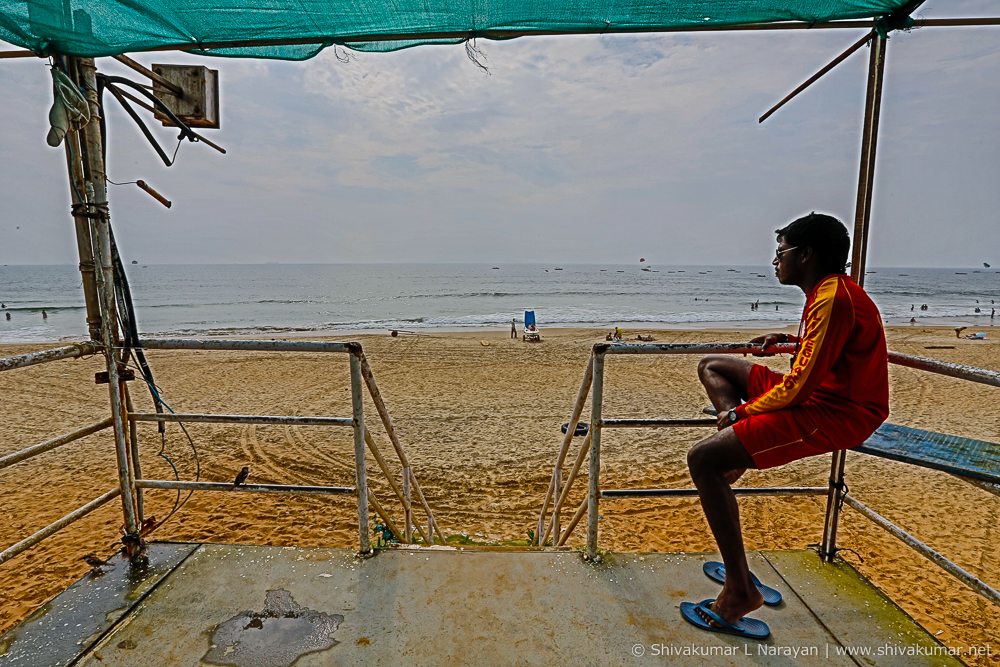 Few weeks ago whilst i was in Goa for a shoot, i happened to spend a noon at Baga beach gathering some B-roll for the footage i was shooting for a after movie.  While walking around i bumped into this Life Guard tower. I spent time around the tower shooting and then walked up the stairs to the viewpoint area where these guys sit and watch whats happening on the beach. These guys take turns and come out in open keeping a keen eye on what people are upto. At first they blow whistle to get attention of the people are trying to venture deep into the sea to swim but if they fail to respond, they communicate over walkie talkie to other guards who are on a 4 wheeler patrolling the beach to get the swimmers back to shore. These folks do a really commendable work and they are always on alert and they take turns to keep an eye on each and every corner of the beach. These guys are indeed the guardians of the sea and def deserve a huge respect for the hardwork they do.

I grabbed the above photo of one of the guards and after while he came running back to me asking if i was from some press and if some problem had happened on beach because of which I am taking his photo – when i told no its for my personal use/blog, he immediately responded back “oh facebook ?” 🙂

Btw the above is a incamera HDR from the Canon 5D Mark III. Regular readers on my blog know that am not a huge fan of HDR images, but that day morning i had made up my mind to try this out when out for shooting. Not something which you will more frequently from me but it definitely gives some interesting images at times.

a new journey and a new place …