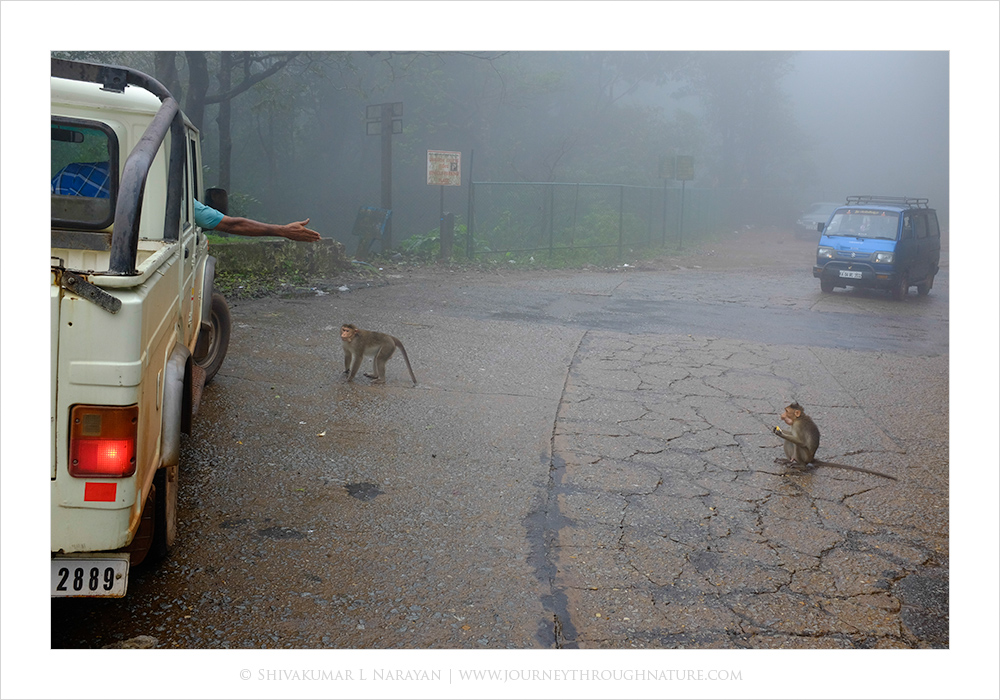 How often have we seen people ( read as enthusiastic tourists ) parking their vehicles in the middle of no where in a forest region and holding out a banana or sometimes even a biscuit or two at a bonnet macaque who are sitting waiting for vehicles to stop by ? This is a common sight in most part of our country either in forests or in busy tourist locations. Few days back i was sitting at this location called “Sunset Point” in Agumbe and noticing a group of bonnet macaques trying to get attention of the cars which have stopped at the view point or the ones passing by. The general tendency of these monkeys is to go near the window of the stop car and expect the driver or the passengers to handout something from inside, but whats happening outside their attention is that they are knowingly or unknowing pushing themself on the busy traffic and making themself vulnerable for getting hit by moving vehicles. What was a bigger matter of concern here was that the location in which these monkeys were straying around was at a blind curve leading from a steep road and the heavy rain plus the mist had made the visibility for drives more worse than expected. Added to this the monkeys sitting on the road would force them to be more cautious which they never are and there by leading to disaster. Apparently this very situation above where I shot a monkey sitting on the road and eating banana given by this pickup truck on the left, the blue van was almost on the verge of running over the tail as the primate was busy savoring the fruit given by the driver. So all these leads to one single point – why are we “humans” even creating these dependency for the animals to expect food from tourists ? The more the tourist dont understand the basic thing, the more these animals come out to open with an expectation to get food and there by risking their own life. On other hand there is always a risk of these animals going ahead to attack the tourist to grab their handbags or baskets to grab the food item themself which is a risk to the tourist themself.

So if you are one of those tourist/traveler who are into feeding animals at tourist locations, avoid doing that and set an example for others not to do it.