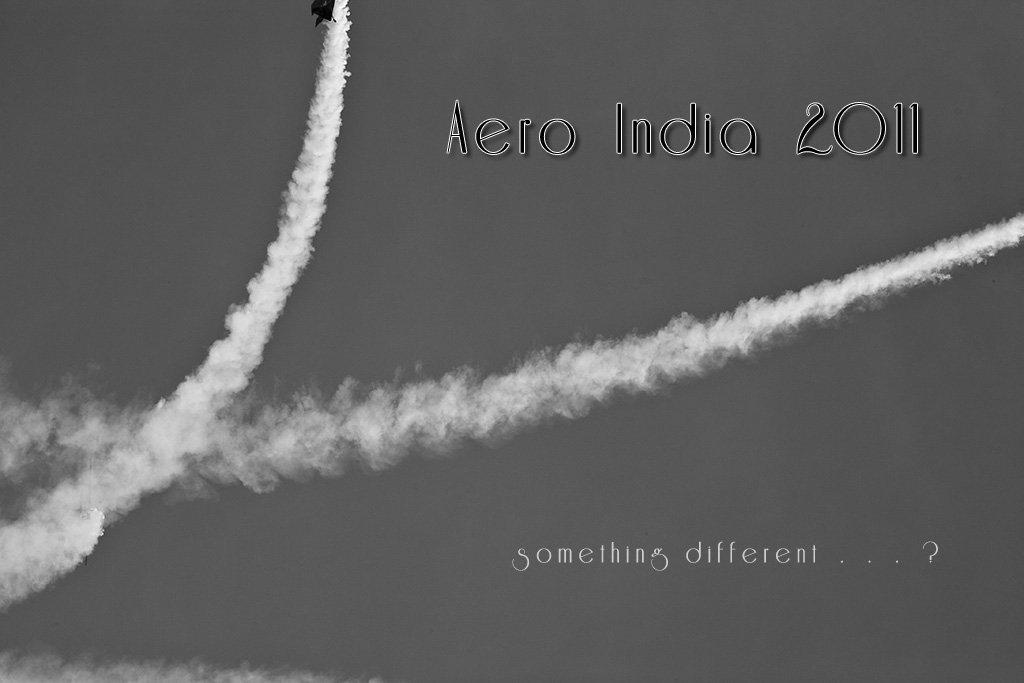 Continuing with my previous post about Aero India 2011, where i referred to about “Why do the done ?“. In this follow up post which you can call as Part II or Next in the series I shall be presenting to you two things i tried out with regard to presentation of the Air show images from this year.

Probably i wont have much to talk about the first which is the video bit here as i would confess that this was an influential decision what i got from another photog friend of mine who had gone to the airshow the day previous to what i went and i felt it really makes a lot of sense to have the visuals shown in form of video than the stills, because it in one sense will try to portray the adrenalin rush and the daredevil stunts that the pilots perform which in other wise is a bit difficult ( in my views ) to portray in form of still images. So this thought made me carry my handy-cam along with me ( so now you know i have an excuse for the pretty poor video quality ) and shoot some videos along with the images which i felt i should give lesser weight-age as i had already filled up the hard-disk with images from airshow from previous years.

In the second part of this blog what am gonna present to you is the images which i made during the Airshow this time. People who are already surprised ( read it as annoyed ) seeing a Black & White video of airshow, will continue in the same state of mind ( probably ), because i continued the trend of showcasing the images too in a monochrome way. If you really want to sit on my back and ask me why, my response would be why not ? Time and again during every airshow we see thousands of people attending the 5 day extravaganza and shooting the metal birds in all angles, using lens of all focal lengths, trying out all types of post-processing techniques ( did see some really wierd HDR and Vignette blur and Supersaturated images this time in my twitter and facebook timeline ). But that’s fine, until the point people are experimenting with presentation that should be pretty much fine. What i found interesting was not many had tried seeing the images in Monochrome ( all my friends know me i have a really soft corner for Black & White images ). Its a very tricky thing to try out because most people come to airshow with the intention of seeing the colorful Suryakirans painting the sky with the tri-color, bright yellow and red Sarang doing some acrobatics and this time around the catchy and crazy wild-blue Flying RedBulls. What ran in my mind after seeing the photos in social media for 3 days is that, done-is-done enough of color images are already on the net and also in my portfolio, why not present all the images in mono this time and firing a frame or two on the field did give me enough confidence what i wanted with this experiment. Secondly if i had to shoot the planes in the same old fashion in Mono this wouldnt bring any sort of kicks to me, so I decided let me try to build up a collection of only those images in which the planes/helicopters are doing some maneuvers leaving out smoke trails and what you see at the end of such though process is a collection of below images which gave emphasis to some unseen and unthought of compositions and presentation style. During the course of the day some images which really made me happy were the ones with the moon in the frame which i shot during the second half of the day and definitely the frames i shot first time of the flying Redbulls (these planes have a really irritating and crazy sounding engines). I def missed seeing the Tejas ( LCA ) and Mirage ( which apparently flies only on Day 01 ) but other planes ensured i had my share of smile when i left the place for the day.

So hope you all will appreciate the two “something different” presentation of the Aero India 2011 visuals. And if you really feel that this new concept really impressed you ( or even if not ), please drop in a line or two in the comment section below with your honest opinion as i really feel its very important to know what the viewers feel also along with what i felt when i was shooting or sharing these images.